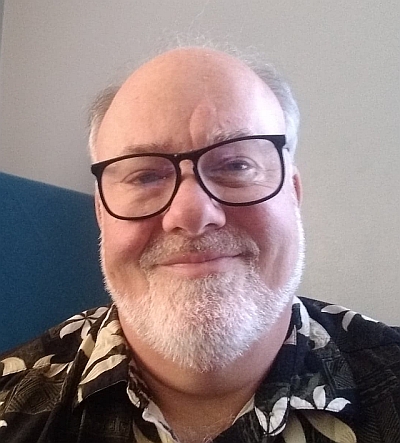 Alden Henry Studebaker, Jr. was born on February 19, 1957 in East Chicago, Indiana, and lived in the small town of Dune Acres on the shore of Lake Michigan.  At age ten, his family moved to Honolulu where his father, A. Henry Studebaker, worked as the Assistant Director at the Bishop Museum.

In 1975, Alden graduated from Punahou School and enrolled as a chemistry major at the University of Hawaii.  While attending college, Alden began to question his career track.  One Sunday, while listening to the minister’s message at the Unity Church, he felt an unanticipated calling to the ministry.  After wrestling with this newfound vision, he changed his major to religion, and began to move forward toward the goal of becoming a minister.  In 1980, Alden received a B.A. degree with a major in religion, minor in history, magna cum laude, from Western Michigan University in Kalamazoo, Michigan.  In 1982, he entered the Unity Ministerial School.  While in school, he served as the student minister of the outreach ministry in Leavenworth, Kansas, and as a chaplain at the nearby military prison.

While on sabbatical between church assignments while living in Topeka, Kansas, Alden wrote the manuscript for a Bible handbook specifically geared for the metaphysically minded student.  In 1998, Wisdom for a Lifetime (How to Get the Bible Off the Shelf and Into Your Hands) was published by Unity Books.  Since its publication, Alden traveled around the country presenting talks and workshops on the benefits of positive, practical Bible study, and was interviewed numerous times by newspapers, radio, and television about his book.  To date, the book has sold over 13,000 copies.

Following the success of Wisdom for a Lifetime, he ventured into the realm of fiction with the visionary novel, The Grid, published in 2002.  The Grid, set in world of the electric power business, offers a view into a future of non-polluting, sustainable energy.  His father, a Purdue University trained mechanical engineer, provided him with much needed technical assistance.

In 2009, he was inspired by his Hoosier roots to write a tongue-in-cheek comedic book, Hoosieritis: The Contagious Condition That Is Indiana.

His second novel, The Fault, came out in 2011, and is set in the Greater Los Angeles Area.  Alden drew from his experiences living in Los Angeles plus his interest in amateur geology.

He is also the publisher and editor of Not Just Any Bag of Bones, an autobiography written by his brother, Jonathan Studebaker, published in 2018.

In 2020-21, while in-between ministry assignments, and during the Covid-19 pandemic, he reedited and republished all five books through Amazon Kindle Direct Publishing.  This allowed for more readable books, additional photos, and lower prices to readers.  He also made the first edition audio cassette tape version of Wisdom for a Lifetime available on Audible.

His wife, Donna, became a Licensed Unity Teacher in 1985.  They live in San Carlos Park, Florida (near Fort Myers).  They have three adult children, Jennifer, Nathan, and Danny, all graduates of Indiana University.